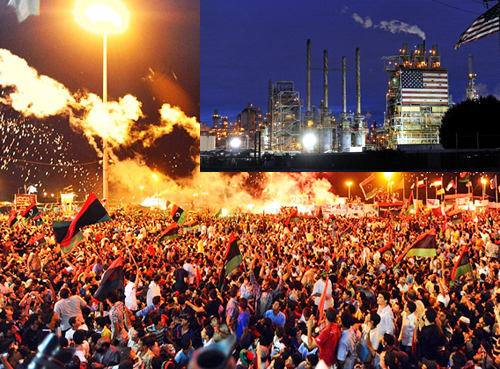 Obama’s energy policy has put American front and center, and while Americans are reaping enormous relief from falling energy prices the developing world is poised to suffer considerably.

That may seem counter intuitive, because energy is needed by everyone. It isn’t only Americans that are benefitting from lower energy prices, is it?

Europe, India and China have unique problems restricting them from benefiting from increased global oil and gas production.

Developing countries in Africa have an even more unique situation making it even worse for them:

African governments have long subsidized their citizens’ energy prices, especially gas and oil, because without natural resources and without refineries, a gallon of gas would just be out of the reach of even the most successful truck driver/owner.

So a gallon of petrol in developing Africa has cost $5 to $6/gallon for the last 20 years, regardless of the actual cost to the governments holding that price for their consumers.

But, you may ask, the governments win or lose depending upon the price, right?

Of course, but over the last decade an unexpected factor entered the equation. New technologies allowed a boom in oil and gas exploration in Africa. Reserves previously too difficult to get were unleashed.

Oil is being pumped from the deserts of Kenya like never before. The government has benefitted much more from the taxes on these natural resource extractions than it has expended to keep the consumer price of oil and gas at stable levels. A net positive increase.

America is unwittingly changing that.

America’s energy boom has crushed world oil prices. Kenya’s tax revenues are plummeting. That’s not even the worst part of the story.

Kenya’s main oil exploration company, Tullow Oil Plc of Britain, announced this week that it was massively reducing its exploration in Kenya. This was a polite way of saying, Goodbye Folks.

The net result of the loss of new revenue over the last ten years against the benefit of reduced energy prices worldwide is a net loss for Kenya and virtually every developing African nation that had recently discovered new oil and gas reserves.

This is a perfect illustration of the gap we talk about so often between the rich and poor. If the rich and poor are equated, and by that I mean subject to identical economic laws and their results, then they benefit or suffer by the same percentages.

When that dynamic is accelerated because the bigger society, America, benefits from a global price reduction in energy (because the net result of cheaper asset value is offset by even greater increases in production), while the smaller society, Kenya, suffers enormously … the gulf widens even more.

No one had predicted the size of the energy boom in America. It’s absolutely unbelievable, and it has widened the gap between America and the rest of the world in near exponential ways.

This is a terrible conundrum that seems out of control. The answer can’t possibly be to restrict production? Isn’t there something inherently correct to presume that if things cost less we’ll all be better off?

If by “we” you mean Americans, absolutely! If the “we” includes Africans, absolutely not. Africans will get poorer more quickly than they ever expected, and I think that will set off another and much greater Arab Spring.

There is a solution to this. It’s a nasty term called redistribution of wealth. It’s even more nasty than Republicans in Congress believe, because I’m not just talking about recalibrating America’s tax code.

This one is about the whole wide world.