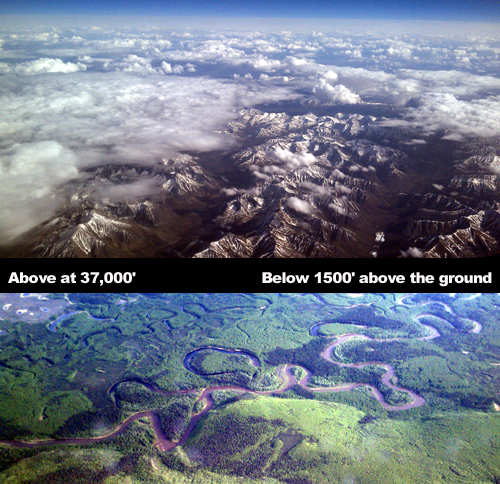 Some things are so big, it’s good to first try understanding them from the air. That’s Alaska, and that’s one big difference with Africa.

Not that Africa isn’t big. In fact I have fun explaining to clients that the distance from Mombasa on the Kenyan Indian Ocean, to Dakar on the Atlantic Ocean – that distance is greater than from Dakar to New York.

But in that massive area there are oceans, deserts, lakes, raging rivers and tiny streams, volcanoes and canyons and really really hot places and very very cold places. There is a biomass variety to Africa that is mind boggling.

And equally mind boggling is how quickly one ecosystem will change into another. Lake Manyara National Park is the best example, a relatively tiny place of around 40 sq. miles with more species of native trees than exist in the entire Upper Midwest where I live! But no single place, no more or less 2 or 3 uniform ecologies, rival the expanse of Alaska.

Alaska is mind boggling in that way. Mostly, it’s just so incredibly big. And hate to say it, but big is beautiful. And obviously there is a difference between the high arctic ecology and Admiralty Island park’s rain forests. But interesting, there’s not a lot in between. There is a beautiful, gradual change from one major ecosystem into another.

I’ve visited Alaska a dozen times, and every time begins obviously with the flight in. Unfortunately, Alaskan weather doesn’t give you very good odds at seeing much until you hit the runway and spray the day’s rain onto your window.

But today was special for me! Good, beautiful, clear and crisp weather. But of the many big things I expect to see with my group of intrepid travelers over the next several weeks, we can hardly cover the whole State. Here’s another GoogleEarth-line: From the Aleutian Islands in Alaska’s west to Ketchikan in its southeast – that distance is greater than New York to San Diego!

So it was a treat for me to see something we won’t on this trip – directly below as the cloud’s cleared and we were about an hour out of Fairbanks was the Wrangell-St. Elias National Park and Tongass National Forest.

At 13.2 million acres, Wrangell is bigger than Switzerland, not only the largest national park in the country, but in the world. And Tongass which adjoins it includes most of southeast Alaska. Add them together and they would be the fourth largest state after Alaska, Texas and California.

And unlike Texas and California, probably 80% of it has not been stepped on. Satellites have mapped its every nook and cranny, but no footsteps of man.

And then I considered… Wrangell is larger than all the national parks of Kenya combined!

That was my first view of Alaska, today. And as we descended the snow-capped mountains revealed some of the lushest earth on the planet, the rich biomass exploding in celebration of the solstice.