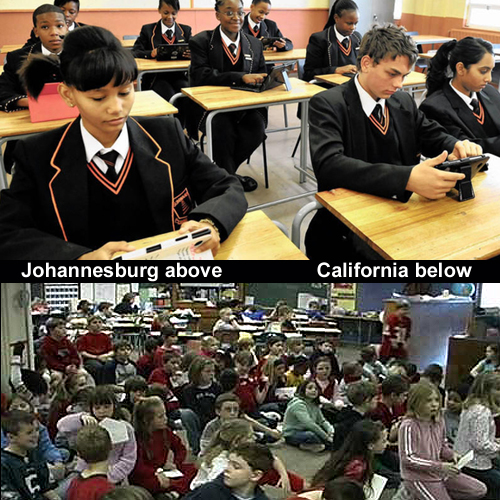 Fifteen countries in sub-Saharan Africa fund a regional organization that evaluates those country’s educational system and produces recommendation for improvement. SAMEQ is essentially the Department of Education for sub-Saharan Africa.

Unlike our Department of Education the most recent comprehensive study of primary and secondary education suggests that teacher and pupil evaluations are meaningless and become entrenched without a broader and more detailed look at that data.

SAMEQ delves into the causes of current performance, and I dare say that they’re the same the world over.

And this simple type of analysis leads to unfettered conclusions.

“Pupil socio-economic status, background, sex, age, grade repetition, absenteeism, homework, and speaking the language of instruction at home” are the greatest determinants of a pupil’s performance, and thereby, the pupil’s school’s overall performance.

And the main contributors to these individual factors are “school resources, school location, pupil–teacher ratio,” and finally, Obama’s focus, teacher evaluation (which the report calls “teacher score”). But it’s critical here to place teacher evaluation on no greater a pedestal than the other important factors.

The report adds that secondarily but still very important, school location seriously correlates with overall educational performance, and that is essentially a wider metric supporting the importance of socio-economic background.

So what does all this mean?

First, I have to say that the study was outstanding. Read the study to see the care with which data was mined, the finesse with with which contributing factors were parsed out, and the enormous relevance of carefully determined variants. Unlike our own government studies which tend to top-load a study with a goal (like school performance), this was a legitimate scientific exploration.

SAMEQ must tread much more carefully on political toes than our own government agencies, so there was little outright recommendation. But it’s there not just between the lines:

The one agreement with Obama policy is that teachers matter a lot, and that teachers can become as entrenched as socio-economic policy. Certainly figuring out a way to enhance teacher performance would be dynamite in improving education.

But so importantly, this must not be the principal concern.

What SAMEQ shows is that government resources – far more restricted in Africa than in America – are poorly used when thrown at the schools themselves.

Using the fact that grade repetition has no effect on student performance, SAMEQ explains further: “High levels of grade repetition have been blamed for increasing the overall cost of schooling, because if many pupils repeat each year, school systems need to employ more teachers and build more classrooms.”

Thus, attempts to work within the system can backfire.

SAMEQ is comfortable with certain remedies that would be not so comfortable in the U.S. “Home Intervention” as successfully implemented in Malaysia, and to a lesser degree in Mauritius and the Seychelles, improves performance.

This means greater funding of social work, something currently anathema in most of America.

And SAMEQ pulls no punches in recommending outright that more of Africa’s limited resources for education should be directed to poorer areas than richer areas.

That’s a direct opposite from America, where school resources are mostly local, so are circular and support themselves. Redistribution is what’s required.

As with immigration, taxation and employment policies, Africa is way ahead of America on educational reform.

And Africa is improving … fast. Is America?