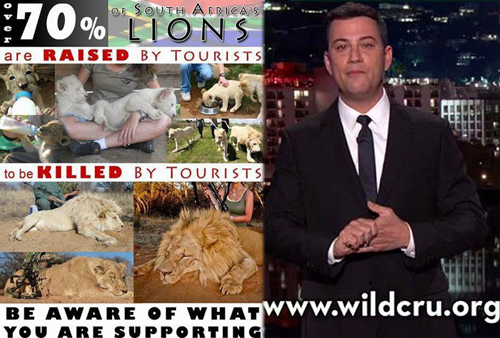 Wild animals in Africa are threatened as never before by western hypocrisy.

Thursday two wildlife organizations, Panthera & WildAid, announced a “Cecil Summit” to plan the allocation of $1.25 billion raised annually to save the lion. This campaign is as absurd as it is distasteful, a stunt playing on good people’s feelings and essentially unmasked by its own hypocrisy.

Cecil was a trophy lion killed by a Minnesota dentist last year which brought to public attention the horrors of “canned hunting,” raising and containing captive lions specifically to be shot for sport.

The public reaction to the story of Cecil was extensive: The U.S. slapped new restrictions on lion hunting and United Airlines forbid future transporting of lion trophy parts were just two of many such actions reflecting widespread public outrage.

All this was well and good. Lions are in trouble. The world’s top lion researchers concluded in October that the population has declined 43% in the last 21 years down to around 20,000 remaining individuals. This excellent study, however, becomes nearly as hypocritical as the “Cecil Summit” when it analyzes the causes.

The study concludes that “indiscriminate killing in defense of human life and livestock, habitat loss, and prey base depletion” are the three principal causes.

That’s fine and they should have ended it there. Instead, in what can be considered nothing short of pandering to African governments and rich westerners at home, the study further claimed that “trophy hunting can … be a tool for conservation but also a threat, depending on how it is regulated and managed.”

Anyone with a tiny bit of experience in Africa knows that in areas outside southern Africa the regulation and management of trophy hunting has been a joke for years. Ping-ponged between authoritarian decisions easily swayed by bribing, to flawed policies imposed by the World Bank, trophy hunting in Tanzania for example has been a corruptible mess for generations.

This duplicitous analysis takes it right from high science into abject hypocrisy.

Imagine you’re an African businessmen or farmer, the family’s breadwinner. Imagine a lion killing two of your cows. Imagine having four children and sixteen grand children with only one child having gainful employment and living next to a wilderness area with lots of bushmeat.

Now imagine that as you try to survive, by getting rid of the lion that’s killing your cows or going out to your backyard and trapping a wildebeest for food, that wildlife officials paid by Panthera or WildAid find you, fine you and imprison you … while a rich Texas businessman is blowing animals – including lions – to smithereens and pasting his trophy pictures all over the internet.

There’s little difference between canned hunting and “wild” hunting, or as it is more egotistically called, “trophy hunting.” You kill an animal. One is a bit tamer than the other, so easier to kill certainly, but the act is exactly, precisely the same.

Canned hunting is simply a more honest version of wild hunting. Each time a lion is shot there is one less lion, and that is not conservation.

Why can a rich Texan break the law? How do you explain this to the businessman or farmer trying to survive?

You can’t. And when you try to, your whole mission is impugned in hypocrisy.