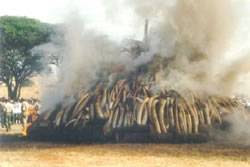 The next meeting of CITES in March will be a crucial one. So far only 21 of the treaty’s 175 country signers have joined Kenya to support a ban on further sales of ivory.

Not even Tanzania has yet joined the Kenyan coalition. This is extremely bad news for elephant conservation.

Kenya, the United States and the International Union for Conservation of Nature (IUCN) were the original three creators of CITES, drafting the 1973 world treaty. But it took 16 years of subsequent diplomacy to get the constituent countries to agree to an ivory ban.

In October, 1989, CITES officially placed elephant in “Appendix I” of the treaty, banning any sale of any elephant product, including of course ivory. That and the aggressive moves by such countries as Kenya saved the world’s dwindling elephant population.

The Kenya Wildlife Service (KWS) made American network news on Saturday, July 18, 1989, when it set to fire a pyre of $1 million worth of confiscated ivory, at the time more than 12 tons.

On July 14 of this year, 2009, KWS officials confiscated an equivalent $1 million worth of banned wildlife products that were connecting through Jomo Kenyatta Airport from Mozambique, addressed to the Xaysavang Trading Export Import Company Limited, Vientiane, Laos.

But this $1 million wasn’t 12 tons as in 1989, but only 600 pounds of ivory and 45 pounds of rhino horn. An expected but unfortunate result of the success of CITES has been to increase the value of such banned products.

“Since Mozambique has no rhinos and few elephants we suspect the trophies were illegally poached from neighboring countries and transported to Maputo by road,” said KWS Director Julius Kipng’etich.

“We will be doing a DNA to determine where the elephants were illegally poached from but it is highly possible it was in Tanzania, Namibia, Zimbabwe or South Africa,” Mr. Kipngetich continued.

None of these countries has yet joined Kenya in support of a continued CITES ban.

Still less than two-thirds the size of the continent-wide population in the 1950s (the Kenyan population stands at 32,000), elephant numbers have increase robustly since the CITES ban. Countries where poaching was little of a problem, like South Africa, want now to be able to sell their huge warehouses of harvested ivory, most of which has come from normal deaths or scientific culls.

In 1997 as poaching seemed to be on the wane, CITES downgraded elephant from “Appendix I” to “Appendix II”. This allows a “limited trade” in ivory. Kenya and other conservationist-oriented countries successfully stalled this implementation with endless proposals to define exactly what “limited trade” would be.

Kenya felt successful under the circumstances, and only five date certain sales subsequently occurred of warehoused ivory, mostly from southern African countries. All were auctions to Asian traders.

But following each of these auctions, conservationists insisted that poaching became resurgent, threatening populations where poaching is still a threat, such as in Kenya.

Then in 2002 came one of the greatest political blows to elephant conservation, and out of the blue, and from one of the original three creators of CITES: the United States.

At the 12th conference of CITES in Santiago, the Bush administration proposed an amendment to the treaty that would further erode its enforcement.

The day before, on November 4, the head of the U.S. delegation, Assistant Secretary of the Interior, Judge Craig Manson, supported the ban strongly in his opening remarks, saying that the United States “remains concerned regarding any resumption in this trade because of potential effects on elephant populations and ongoing monitoring efforts.”

Somebody in Washington was listening. Manson got a call late at night. The next morning he not only reversed his position, but he actually offered an amendment to the treaty which would forbid elephants from ever being placed on Appendix I again!

The outctry was palatable. The European Union was infuriated. Kenya felt snubbed. Manson received 12,000 emails in the course of an hour and left the conference early.

The amendment was not adopted, but without U.S. support to relist elephant into Appendix I (which Manson had personally originally supported), the conference kept elephant in Appendix II.

Controlled sales of warehoused ivory, although very limited, have continued.

The three-year drought that just ended in East Africa has exacerbated the problem even further. KWS documents a “quadrupling” of elephant poaching before the drought ended this month, over the course of 2009.

In part this is because elephant began to wander far and wide from the protected reserves searching for food and water. In part it’s because so many desperate Kenyans had little to eat or drink. (Read my blog, “ANIMALS OR PEOPLE” of October 4). And in no small part it’s because of a new and larger presence of Chinese in Kenya, as that country drills for newly discovered Kenyan oil and builds new roads with a multitude of new workers.

Kenyan authorities earlier this year impounded three tusks and deported three Chinese workers apprehended on the Isiolo/Marsabit road works. Kenya’s commitment to conservation couldn’t have been more forcefully demonstrated. Kenya needs the Chinese oil exploration; it will be a very needed boon to the country.

On hearing of the deportation of the workers, the Chinese government halted development activity in Kenya, including road works and oil drilling, for three months. It has since resumed.