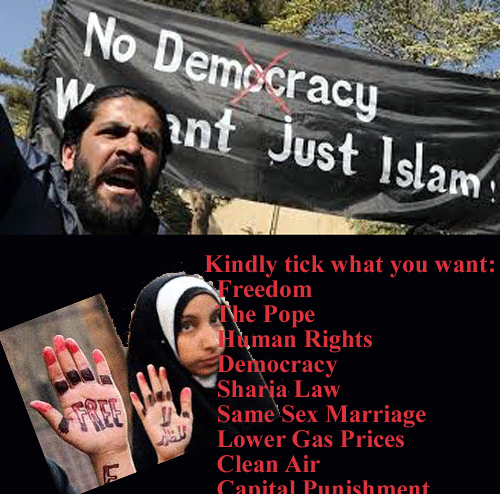 Egypt was at the beginning of the Arab Spring. The revolution evolved into one of the most amazing democratic movements the world has ever seen, and what’s more, the country somehow managed to pull off a truly free democratic election even with an electorate that included many illiterates.

Nor did Egypt’s middle class, the driving force for the revolution, so they went to the streets again, jailed the freely elected president in true Robespierre fashion, then installed some strong man they liked better.

Well, hey, Richard Daley wasn’t all that democratic, either, right? But now Egypt is putting on trial journalists who were doing nothing except what I’ve just done in the few paragraphs above.

And while we’re exploring the depth of irony, consider this amusing digression:

I’m trying to lower my cable bill. So I actually made a long journey from our home in the woods to the city to speak face-to-face with a sales representative at their office. I had a list of 7 channels my wife and I want. (Rots of rock, right?)

The smartly attired sales representative nicely nodded to each of my written requests, throwing in another 80 or 90 other channels necessary for available packages, until she got to “Aljazeera.”

Aljazeera in my estimation covers Africa better and more fairly than any other world news outlet, including the New York Times.

She asked me to wait, went into the back office and returned with her boss who told me they don’t carry terrorist channels.

It’s Aljazeera journalists who are on trial today in Egypt.

Senator Tim Kane representing the wholesomeness of American democracy and the paradigm of a liberal supporting a strong man is in Cairo, today, to deliver a couple billion dollars in aid with strings.

Egypt “must balance steps towards democracy with the fight against terrorism” Kane explained, as the newest and remarkably still unstable U.S. position.

(Funded by a distant upper class, by the way, and with a charge led by the state’s Senator, the very well paid middle class Volkswagon plant workers in Nashville voted against themselves and defeated a proposal to unionize, even after receiving the blessing of the car company that actually hoped they would have.)

What this shows is that democracy can create a bad outcome. And that bad outcome usually is when individuals are somehow influenced to vote against their own better interests.

By the way, one of the great advancements in the English language of the last several centuries was coming up with a single word for the phrase, “propagating a lie.”

Democracy has become too vulnerable to propaganda. And what Egypt shows is that even when democracy is reversed to achieve a better human rights environment, for example, it just can’t seem to go in the right direction.

Is there something better?