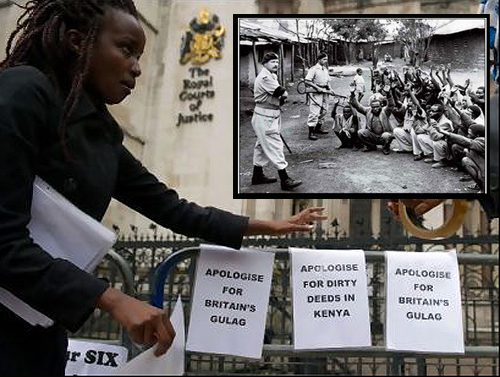 Britain’s invitation this week to Kenya that it seek financial compensation from the U.K. for acts of torture more than a half century ago opens a topic that could be stinging to the United States.

In fact the release of previously sealed and top secret documents from the U.K. Foreign Office suggested there could be still living as many as 10,000 Kenyans due compensation.

The tedious process of negotiating individual claims began last year, and attempting to get out in front of what could have been an endless line of petitioners, the British government commissioned the report that was handed to Kenyatta Tuesday.

Quite apart from the tens of millions of pounds likely to be paid to the victims of Kenya’s insurection, the released secret documents, court case and Tuesday’s government commission report opens the gates to similar allegations from other foreign colonies.

The British report acknowledge Red Cross archives that documented widespread use of torture techniques including waterboarding and worse, waterboarding with kerosene.

Kenya reacted yesterday by demanding an official apology from the British government:

Britain should “offer a public and unconditional apology to the people of Kenya for all injustices and gross violations of human rights committed by the colonial administration between 1895 and 1963,” the Kenyan response says.

Note that Britain and Kenya right now are not the best of friends. In fact, Kenya has few friends in the world as the world awaits to see if its president and vice-president will stand trials as accused for crimes against humanity scheduled to begin in just a few weeks.

The British report and offer of compensation, however, seems completely unlinked to the UK’s current cold shoulder attitude towards its former colony.

And there is every concern in America that the British action sets a precedent that could severely impact the U.S.

If U.S. violations, including torture and unwarranted war, become issues for compensation, there could be literally millions of claims.

No formal reaction has been forthcoming from the U.S., although Voice of America broadcast this week a story admitting that the “The Mau Mau settlement would set legal precedent.”

The report did not elaborate as to whether it was legal precedent restricted to Britain or one that would be more global in nature.

And of course a number of other warring or former colonial powers would be just as vulnerable to legal attack as the U.S., mostly notably France.

Current American occupations of Iraq and Afghanistan are really little different from the European colonial actions in the past century.

The West has a distinct problem imposing its will. Perhaps a financial slap will bring western morality to its senses.