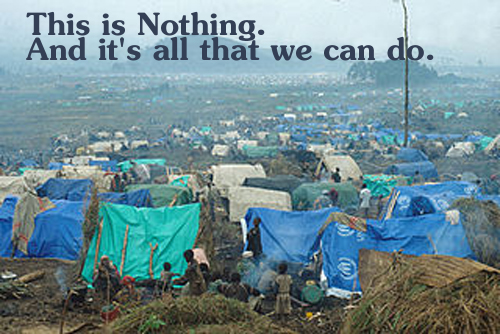 The West’s recent history in Africa tells America clearly what it should do in Syria.

Somalia is today less lawless than it was with an emerging society and government yet threatened internally by remnants of the warlords who had wrecked havoc of the place, but in sum … peaceful and actually, pretty free.

A year after abandoning Somalia Clinton and his staunch ally, France, blocked the Security Council from stopping the Rwandan genocide. Up to a million people were killed and twice that displaced in one of the most brutal and horrific genocides the world has ever seen.

Today Rwanda is run by a merciless if beneficial dictator and peace is as strong as its many new steel prison gates. The economy fueled by western aid is booming, but be careful what you say in public.

Peace came quickly to Rwanda. It took a generation in Somalia. One is utterly peaceful but not free; and the other is free but not utterly peaceful. Neither outcome is pleasant, but many fewer people are dying miserably.

The west was perfectly able to send missiles, tanks and soldiers into Rwanda and Somalia and create a pacified society, just as it did in the Balkans.

That’s something I wanted to happen at the time in Somalia and Rwanda, and something I might support, now, in Syria.

But anything less than everything is wrong. Clinton couldn’t morally justify intervention in Rwanda or Somalia, he said, because intervention he felt would only make matters worse.

That may have been true in Somalia; it certainly wasn’t true in Rwanda, but regardless, it wasn’t his reason. His real reason having been burned by Blackhawk Down’s failure was that it would be too expensive to be effective, or possibly that such a larger involvement would invoke restraints from other world powers.

Africa is rife with histories of such conflicts that could have been pacified in addition to Rwanda and Somalia: The Congo, Central African Republic, Burundi, Sudan and today, contemporary Zimbabwe. In all these places absolutely horrific situations exist or have existed but did not reach the threshold of western military involvement.

Because in every one of these, however tiny they may seem relative to Syria today, we knew that anything less than a complete occupation and Marshall Plan for rebuilding, would fail. So .. we did nothing.

It was “all” which was not possible, or nothing. I have never forgiven Clinton or his ally France from not going into Rwanda in 1993, but over the years I’ve grown comfortable with having abandoned Somalia, growing to embrace the cogent argument that involvement would only have made matters worse. It was a hard lesson to learn, a very bitter pill to swallow.

Now, for some reason, America is turning away from this learned lesson. Limited involvement in Syria will make matters worse.

America is trying as it does so well to find a loophole, a way around this clear maxim that it is all or nothing. Obama would have us believe that we have an obligation to uphold global human rights, that as the strict parent or stern teacher or Global Policeman, we must punish those who go too far.

In his speech, he called the use of nerve gas “an assault on human dignity” that had to be redressed.

Why are the 1426 people killed last week in Syria by nerve gas more of an assault on human dignity than the 800,000+ that we allowed to be massacred in Rwanda? Or the same number today in The Congo?

Yes, it’s an assault on human dignity in all cases, but selectively applied it loses its imperative force. Presumably nerve gas and the world’s conventions against it violate the ethics of war. That’s rather laughable, of course. Machetes were as effective a weapon of mass destruction in Rwanda, and would have been much easier to prevent.

Obama defined this Red Line, because he believed incorrectly that we have the power to define. We don’t. There is no Red Line. There is massive injustice fueled by ethnic hatred, exacerbated by a capitalistic system gamed by the United States. There is war. There is no point at which that war is bad and then good. Red Lines may have meaning in quantity, but certainly not in quality.

No, the real motivation for Obama to intervene in Syria is the same motivation that kept Clinton from intervening in Somalia and Rwanda: “national security.” Clinton didn’t think national security was threatened. He was right in Rwanda but wrong in Somalia, where al-Qaeda was refueled in the years that followed.

From the amoral point of view of national security, Clinton made one right and one wrong decision. But he did it honestly. No “assault on dignity” was proferred.

Obama and Congress and the military are now obsessed by 9-11. The guilt-ridden ideologues among which are Obama and the second Bush and most of our lot of ineffective politicians are terrified at the notion they might be sitting on their thrones while a 9-11 happens, again.

So they’ll throw the kitchen sink at every shadow of a mouse trying to get into the house. They forget that Somalia and Yemen spawned more terrorists than Syria or Afghanistan:

“The greatest irony of this era in the Middle East is that the two rulers most committed to crushing Islamic fundamentalism in the Arab world, Saddam Hussein and Colonel Gadaffi, were overthrown by the West. And in Afghanistan and Iraq, Western countries won the war but failed to replace the dictators with effective governments,” explains the African analyst, Richard Dowden.

You cannot stop terrorism with itself. In today’s interconnected, high tech world you cannot fight fire with fire. You learn to live with it, stopping it closer to home when you can. Otherwise, anything short of “The All” as was the case in Afghanistan and Iraq, is destined to backfire.

The time has come for America to accept the following:

(1) We cannot stop terrorism against ourselves with preemptive military actions like those currently anticipated in Syria.

(2) We are not powerful enough to reverse a civil war far away from home, without the entire world with us (as it was in the Balkans).

(3) Only the UN is left as world policeman. And it will be a very long time before there is enough unanimity again in the world to so act as it did in Balkans.

(4) America does not have enough power to punish without worse repercussions.

It’s a sad, sad time. But there is no alternative that isn’t even sadder.