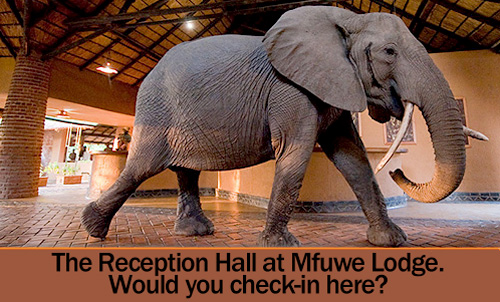 Zambia’s biggest, arguably best and certainly most famous game lodge, Mfuwe Lodge, presents a special opportunity to its residents from October – December. You can be squashed by elephant.

The lodge is a truly wonderful place, near a river in Zambia’s best game park. By today’s standards, it’s fairly if even value priced. The problem has nothing to do with the politics in the area; Zambia’s politics is a constant clutter of insignificance. It’s not because of AIDS or too many mosquitoes or anything of the sort.

It’s because: “Elephants march through hotel lobby … on their migration trail!.”

That report by London’s Daily Mail was first published in October, 2008, nearly three years ago. And the lodge hasn’t figured out a way to stop it, yet.

I called the lodge Tuesday morning and spoke to Client Relations Manager, Lucy. She confirmed that the elephants came last year and are expected this year. When I asked her if it wasn’t dangerous, she replied:

“I’ve been here for 4 years and nothing’s happened. When they come through we make sure that the guests are out of the way.”

Don’t they break things in the lobby? I asked. “If the juice is out, they might come and drink a glass of juice.” How many? I asked. Well, the original family is 10, but now there’s a second family that also strolls through the hotel.

Mfuwe Lodge has been around for as long as Luangwa welcomed tourists, which is many decades, but it was rebuilt five years ago. The story goes that they didn’t realize they had built the hotel right on a “migration route” for elephants.

Well it’s not exactly a migration route. It’s just that the new hotel layout cuts off a grove of wild mango trees (loved by elephants) from the greater surrounding bush.

Ele would not normally walk through a building, no matter how attractive was the fruit stand on the other side. But Luangwa is not and is not supposed to be a normal place. This is where walking safaris were pioneered by Norman Carr years ago. And the tradition has been preserved to the present time. The animals here are much more acclimated to people than elsewhere in Africa.

I consider that a danger. It’s a danger that once advised may not be considered serious enough to change your travel plans, and to be sure, if you want to walk among wild African animals, this is probably the safest place in Africa to do so. I don’t recommend walking with animals, anywhere. Note that Luangwa is a great place for traditional vehicle safaris.

The walks in Luangwa are led by trained, armed guides. Presumably check-in at Mfuwe does not include an elephant gun rack.

But if you stay at Mfuwe Lodge when the wild mango are ripe enough for the ele (usually the first of October through the end of the year), they’ll most likely be joining you for tea.

The Mfuwe Lodge elephants are clearly habituated to people. So are zoo elephants, but I’d be hard pressed to find a single zoo director in the world that would allow patrons to get this near them.

It’s a mistake that’s been fortunate enough to have had no consequences, yet. Don’t you be there when it does.