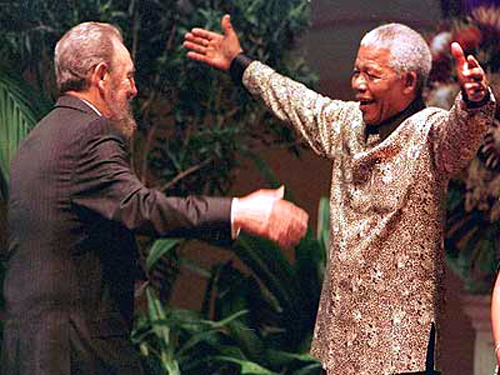 South Africans echoed most of the continent yesterday in praising Obama for normalizing relations with Cuba.

In my lifetime Cuba has been active in Africa and seems to have chosen the right sides to support. The current Tanzanian regime, the current South African and Angola regimes, were all receiving aid and support from Cuba when they were considered outcasts by much of the rest of the world.

It was no surprise, then, that the current South African government issued a very positive statement of support for the Obama initiative.

It seems odd now to hear our own press and officials speak of how small and poor Cuba is. I don’t doubt it. It’s just that few “small and poor” governments figure prominently in aiding and assisting other (possibly even smaller) poor governments.

Cuba’s medical reputation is considered stellar by most African governments. It was among the first to offer AIDS assistance and recently help in fighting the ebola epidemic.

Personally I remember walking shoulder-to-shoulder with Cubans in the 1980s in … you’d never guess, Cape Verde.

In the 1980s South Africa was a strict apartheid regime and Cuba was still fiery and revolutionary. Because the two diametrically opposed regimes were at the very fringes of their ideology, most of the world kept them both at arm’s length.

Cuba was sending money and military equipment to revolutionary movements in places like Angola and The Congo. South Africa was trying desperately to break the United Nations sanctions that were crippling it because of its apartheid policy.

So the two crossed paths, every night about 1 a.m., in the Cape Verde Islands, just off the coast of west Africa.

South African Airways was banned from landing in any other African country, and in those days long-range aircraft couldn’t make the U.S. without refueling. Cape Verde was and is one of the smallest and least developed countries in Africa. South Africa bought them, built them an airport and used it every night to refuel on its way to the U.S.

One airline per day could hardly support the South African investment, so with tacit approval from the communist hating, fascist regime in South Africa, Cape Verde also allowed the airline from Cuba to land to refuel its missions of revolution and contraband into the continent!

And to economize, it only made sense to work as little as possible. So both airlines converged at right around the same time.

And all us passengers got out and stretched our weary legs on these very long flights by walking together in circles in a gym that seconded as the Cape Verde terminal!

I wouldn’t be surprised if I was rubbing shoulders with African revolutionaries, and more to the fantastic point, if some of South Africa’s horrible apartheid officials were doing the same!

So go the ironies of the world and the vagaries of excessive ideologies.

Now, finally, some of this nonsense is coming to an end.