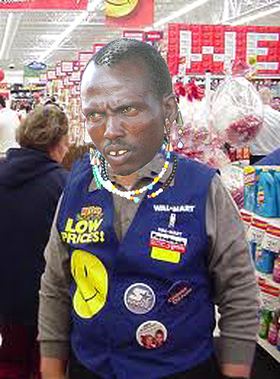 Does Africa need lower prices? You bet! In just a few years there will be Walmarts in virtually every major African city. I think Africa can handle it. So I say, “Bring‘um On!”

Predictably, business interests hailed the merger. Worker interests decried it. The South African government commission which approved the merger is imposing a few restrictions, including maintaining the existing labor/union mechanisms which many had feared wouldn’t survive the merger.

Everyone knows what this means. There is no dispute that Walmart will lower prices, probably boost quality in an African market known for shoddy alternates and outright fakes, as well as lowering wages and reducing other existing worker benefits.

“Can you imagine what [will] happen in Africa, with its extremely vulnerable workforce and inadequate and unenforced labor laws?” Mfonobong Nsehe writes on a Forbes blog consortium.

But two-thirds of South Africans support the merger. The reason is simple, and it’s Walmart’s signature: Lower Prices.

And the counter argument is that lower prices mean lower wages mean either depressed economies and/or an increasing gulf between rich and poor. Click here for a great interview of Patrick Craven, a South African union spokesman.

America exports Walmarts, because America is the world’s largest and most fundamental capitalist system, and Walmart is the epitome of what capitalism means. Walmart, in turn, exports human rights abuses when it sources vendors from foreign sweat shops. America champions human rights. Therein the paradox.

If we’re going to live with capitalism then we want its players to be as aggressive as possible so that the system remains dynamic. Healthy capitalism is a bloody thing. And I can’t see impeding Walmart if we’re encouraging Goldman Sachs, or for that matter, Exon/Mobile.

Walmart is not the problem. Walmart has to live under the laws of each country in which it operates, and what that means from the getgo is that advanced industrial societies must take charge of their capitalist development. REGULATION.

Minimum wages and minimum worker benefits must be increased. Affirmative action, particularly with regards to gender, must be dusted off the shelves and reembraced whole-heartedly. Legions of public agencies, from tiny villages to sovereign governments, must not extend tax benefits without ensuring that tax loss doesn’t depress its citizens’ standards of living or increase the gulf between the haves and have-nots.

The consumer and worker must always get the better shake. Business should be seen as serving, not feeding on, consumers and workers.

It’s now up to the African governments. They’re newer and not as beholding to giant capitalist entities as the American government has become, and there is a real possibility they will be able to regulate this behemoth with the same idealism they profess as overall goals of governance.

Africa has a chance to get it right. But they dare not model America. We haven’t done so well.