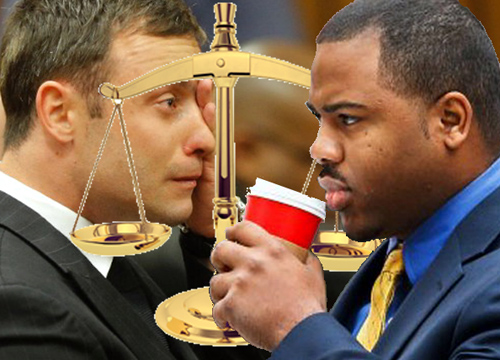 In the U.S., a hung jury without justice. In South Africa, justice on high.

Yesterday a Baltimore jury denied or at least delayed justice to the family of Freddie Gray. Last week in South Africa, its supreme court overturned a jury’s refusal to convict Oscar Pistorius of premeditated murder, and convicted him.

Jury verdicts in the U.S. are deemed final. In South Africa and some other countries courts have the power to dismiss a jury verdict and replace it with something else, including a conviction on the original charges.

I think everyone would agree that a jury verdict is not always correct. In both the Pistorius & Gray cases the jury verdict seemed incorrect to me based on the testimony during the trial. I’m hardly alone in these conclusions.

Yet there is much less opportunity for a remedy in the U.S. than in South Africa. A possibility exists now that the Baltimore prosecution will not even retry the defendant. Even if they do, a initial mistrial often suggests the same will happen all over again.

Both cases, by the way, I believe evolved out of excessive gun violence and the excessive availability of guns.

With Congress still preventing any collection of statistics regarding gun violence, it’s harder to determine whether this is true. But presuming an important explanation for police overreaction is that they face such extreme danger, what is that danger?

In the South Africa case that was in fact Pistorius’ defense: He did not mean in fact to kill his girlfriend but thought he was shooting an intruder, because there are so many intruders in South Africa with so many guns and so little police protection.

South Africa, by the way, is not sheepish like the U.S. in trying to figure this out. They are compiling study and after study that inexorably links growing gun availability to increased crime.

(1) Both countries have massive arms manufacturers. South Africa in particular developed an enormous industry during apartheid particularly after worldwide sanctions were imposed.

(2) Both countries have vigorous laws to protect individual freedoms. The U.S., however, has been so influenced by the wacko NRA that this freedom is now presumed by many (and by some states as in Florida) to mean you have the right to shoot to kill in presumed self-defense!

An American university president recently told his students that they ought to carry concealed guns into the classroom.

Concerned that such irrational frenzy could infect South Africans, its newer constitution created many more impediments to personal gun ownership than exists in the U.S.

Unfortunately these many good laws aren’t enforced because they have so few police. Recent parliaments have conceded much residential protection to massive private security firms rather than deploying an adequate police force.

Guns attract more guns. The weapons’ industry might begin making tanks and missiles, but it’s soon making handguns along with everything else more appropriate for hooligans and rednecks than soldiers.

Good ole Ike’s “military industrial complex” is a hard one to shake.