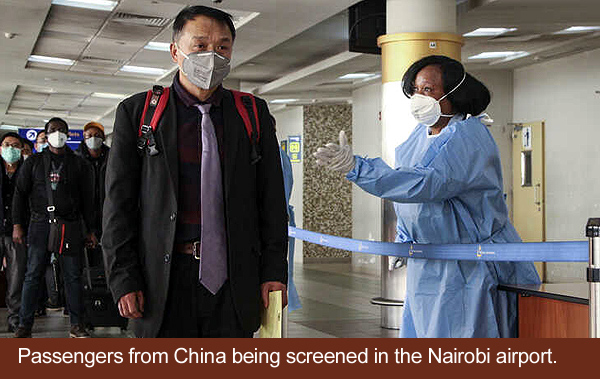 The news about coronavirus is overwhelming, dominating all the major media and social media in sub-Saharan Africa. Several important points, especially for travelers planning to visit Africa, soon.

Africa so far presents a “puzzle” to health officials wondering why there isn’t a greater outbreak there, because travel exchange in Africa with China is among the highest in the world, and as a continent Africa has the least developed public health systems in the world. (Notable exception is the country of South Africa.)

Until a few days ago, there were no known cases in sub-Saharan Africa at all. The case recently confirmed in Africa’s largest megacity, Lagos, is an Italian who had recently returned from Milan. He is in the hospital in Lagos doing well. A week has passed and no further cases have been confirmed.

Africans themselves, however, are freaking out.

Yesterday a South China Airlines plane landed as regularly scheduled at Jomo Kenyatta International Airport in Nairobi. The plane carried 239 passengers of which 198 were Chinese.

Kenyans went ballistic. Social media exploded, one of the country’s major newspapers ran a special edition editorial criticizing the government and by the end of the day the High Court ordered the government to deny landing rights to any future plane from China.

And as far as we know, there are no known cases of coronavirus within 500 miles of Nairobi.

The problem for American travelers is that few arrive East Africa on Kenya Airways’ daily nonstops from JFK; the vast majority still travel through Europe. And while European airlines are tightening schedules from Asia, the flights that are still scheduled are packed to the overhead compartments with Asians needing to travel.

This is a “fear” not a reality, according to TravelGuard and other travel insurance carriers. In other words, it’s not covered.

Until a more serious outbreak occurs in the safari and beach destinations of sub-Saharan Africa, it’s unlikely that customers will receive any compensation for cancellations, now.

Recognizing the importance of “goodwill”, however, organizations like the African Travel Association (ATA) are urging members to “be aware that the longer term commercial consequences of sticking to the legal position at present could well damage client relationships for the future.”

It’s hard, though, for an African hotelier or transport operator to imagine what any future might be like given today’s chaotic global situations.