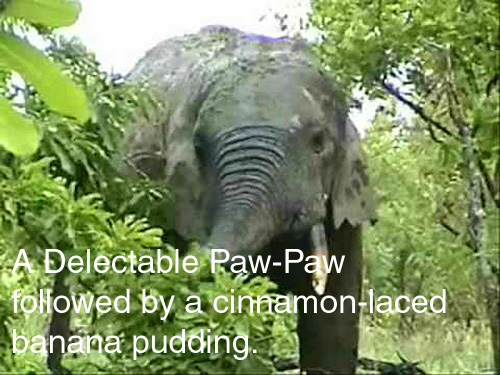 As Kenyan transforms itself with a new constitution into a modern society the question of what to do with elephants has popped up. Just over there, in the garden.

But the problem is manifestly two-fold: there’s the elephant in the garden, and then there’s the ivory in the airport.

And finally Kenyan lawmakers are having trouble ignoring the problem. (Admittedly they’ve got a lot on their plates in implementing the new constitution before next year’s election.) In the last two months alone more than 330 tusks weighing more than 3 tons representing more than 150 elephants have been seized at Nairobi’s Jomo Kenyatta airport.

All the ivory was headed for Asia, mostly China or Vietnam, and often via Nigeria using diplomatic pouches. Kenya is on to it, though, and not even diplomats are getting through as easily as before.

But the increased black market for ivory belies somewhat the other manifest problem: there are too many elephants.

Believe me if you’re a citrus farmer in Voi, Kenya, you’re likely to welcome a little bit of unmanaged hunting at the outskirts of your plantation.

The very proactive Kenya Wildlife Service (KWS) wants lawmakers to change this. They want new laws that would punish the now by standing farmer, and new authority for themselves to police this.

It’s not going to be easy.

Forcing the hand of until now Kenya’s silent farmers may not be a good idea. Following a successful collaring exercise near Kenya’s elephant, Tsavo National Park, to monitor human-elephant conflict this month, farmers became enraged.

Public officials from parts of Taita-Taveta County claimed that more than 500 elephants were terrorizing them. One elected official, William Ikutu, appeared on Kenyan TV allegedly nursing serious injuries following an elephant attack while working his farm in Mwakitau.

Village Chief Crispus Mnyika said the jumbos had imposed a virtual curfew in five villages, and KWS confirmed that more than 100 acres of farmland had been destroyed.

KWS responded with a major air and ground operation to drive the elephants back to their habitat had started involving aircraft, 4 special vehicles and 50 game rangers. KWS will not say how many millions of shillings the operation cost… for obvious reasons.

So Kenyan legislators are getting it from all sides: from wildlife officials wanting stronger laws and greater authority, to Kenyan citizens who want these pesky beasts out of their lives. 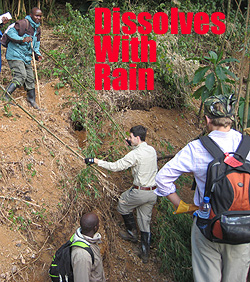 All sorts of things have been tried to separate wild elephants from human populations. Personally, I think outsiders – researchers, especially – have complicated the problem by throwing pennies at the problem, spending resources on nonsense.

Nonsense about chili powdered fences is all the rage, now, and patently doesn’t work. Ridiculous attempts at flimsy electric fences supported by hundreds of thousands of dollars from well meaning but poorly scienced NGOs may be even worse.

Large trenches that I’ve photographed myself in Uganda and Rwanda seem to work a little bit, but they require incredible maintenance and generally dissolve in the rainy season.

The only certain barrier I’ve ever seen is the one I recently photographed in Botswana’s Nxai Pan National Park: spiked concrete blocks that surround a public ablution unit at a public camp site. But this must be very costly. Imagine ringing a 500-acre farm with a minimum 15-foot periphery of these! (The stride of a big elephant is, yes, 15 feet!)

The daunting problem for Kenyan legislators, now, is to try to find enough resources to try to manage the crisis.

The Kenyan economy is exploding, and it’s not because of tourism. Energy development, IT including mobile phone companies, flower farming, even engineering and now new mining will likely eclipse tourism in just a few years.

The urgency for providing potable water and good sewage for its citizens, and a good business climate for its development, are issues of far greater importance to the average Kenyan and his legislator than protecting wildlife.

So all this begs the question: is there enough money left to protect elephants?