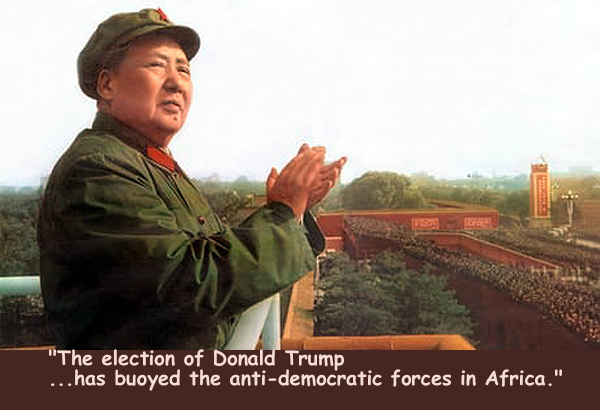 The West’s loss of moral authority has created a vacuum. The rise of far-right movements and the election of President Donald Trump has buoyed the anti-democratic forces in Africa. I didn’t write that. Editors at Nairobi’s Daily Nation did. My #3 Top Story in Africa for 2017 is the rise of the dictator in Africa.

I’m not convinced that Trumpism in the U.S. is directly responsible for the growing authoritarian regimes in Africa. Trumpism could be a world-wide not just an American phenomenon. But if so then Trump’s Trumpism is the most powerful of the lot, and the America for so many years that so arduously promoted freedoms and democracy is no more. The dictator knows.

He knows first and foremost how abjectly stupid America now portrays itself: misspelling African names, renaming countries while forgetting others. American diplomacy this year in Africa was like a nine-year driving a race car.

Over the course of last year new authoritarian regimes came to power in Angola, South Sudan and Zimbabwe; were re-enforced in Madagascar and Libya; and actually made a ‘180’ from democracy in Tunisia.

Dictators whose extended reign seemed threatened only a few years ago gained new and powerful holds on power in The Congo, Chad, Cameroun, Algeria, Egypt, the Congo Republic, Gabon, Guinea, Mauritania, Ethiopia, Zimbabwe and The Sudan.

The kings of Lesotho and Swaziland – teetering on rusting thrones only a few years ago – are once again in absolute rule. Add those iron-fisted rulers who were never in trouble in Burundi, Eritrea, Rwanda and the C.A.R., and surprising democracies like Tanzania that each day look increasingly autocratic and you’ve got a clear trend:

Africa is moving away from democracy.

This is a reversal of the last 30 years, since the end of the Cold War.

Of course it’s linked to Trumpism regardless whether caused or not by it. Trumpism prefers government by decree. In America many of Trump’s first decrees – travel bans – were overturned by the courts. Many African countries don’t have a robust history of separation of powers, no separate and equal branch of government that can at least sort of hold the dictator at bay.

But they had been held back in Africa for 30 years until now, and one important reason was the work of America in Africa over that time. I didn’t always agree with the specific programs being promulgated but in hindsight now I’d give anything to get any of them back.

It was hardly a few months into the Trump presidency when the first indications of this new trend developed.

As dictators made flagrant moves to consolidate power, there was no America (or Europe for that matter) impeding their easy ascension.

What actions America did take absolutely affirmed autocratic rule. The most notable was when the Trump State Department removed sanctions on one of the most despicable regimes in Africa, The Sudan. Its leader remains a fugitive in most parts of the world, indicted for his crimes against humanity.

Trumpism admires the autocrat as Trump admires Putin. Dictators know. In Tanzania the current president is moving slowly but surely into a totally dictatorial rule. Previous American administrations would have pulled the aid strings by now. No change in Trump administration funding.

The Ugandan dictator has tried for years to pass capital punishment laws regarding homosexuality, and now he’s succeeded. All sorts of human rights and freedoms – so championed by America for so long – are suddenly
threatened. The Obama administration actively impeded this.

With such an incredible vacuum of moral authority now found over Africa, yes you guessed it, China reversed a decision made only two years ago to slowly retract from its involvement in Africa.

China is back big time and the Africans are welcoming it with opened arms. Trumpism has succeeded in Making China Great Again.

By the end of the year the trend seemed irreversible. America’s peevish approach to world power, whether random or mean, had reversed a half century of American goodwill in Africa.

Trumpism’s Jerusalem decision would not normally have provoked the reaction it did from African countries. Some say they were prompted by the Chinese. Others simply say they had to express frustration. Whatever the explanation, it was a signal from all the democratic countries of Africa that after a year of disbelief America was now absolutely considered the evil power in the world.

Taking its place around the table of African despots and crazies.