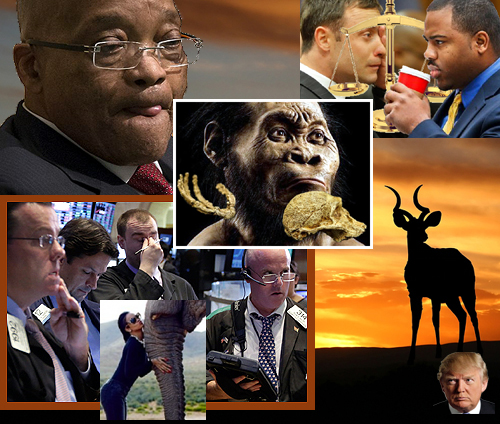 Events in Africa in 2015 reflected a real maturation from reaction to reflection. There were some horrible things that happened but they had definite silver linings, and there were also many positive, dynamic social movements.

Return in the next several days for a more in-depth discussion of these top events. Below is the summarized list:

#1 TERRORISM
As the year transpired it became clear to westerners that terrorism was no longer centered in Africa. There were horrible terrorism attacks in Nigeria and Mali, particularly. But even though the actual number of human casualties remained higher in Africa than elsewhere in the world, it was Charlie Hebdo and November 13 in Paris that sent cold water down the spines of the western world.

Westerners should have taken their lead from Africans who have never become polarized by terrorism. But westerners didn’t, and Africans noticed it.

One part of The West developed a good, rational understanding that terrorism is no more external than internal. But another good hunk succumbed to terrorism. Fear breeds fear, so when used as a weapon the first strike may be external but the final one will be from within.

#2 CLIMATE CHANGE
All of us can recount that day or week of weather that was “unlike anything before.” But my seeing the super storm in the Serengeti on one of my spring safaris was terrifying. It was as if I were in an alien world.

Yet in the midst of such natural fury it’s easier to empathize with the African farmer who struggles even when things are good, and to understand that few global issues can be as politically transformative as this.

Few things can drive a man to desperation. No water one day followed by flooding the next is one. One type of desperation is suicide bombing.

#3 POPULAR MOVEMENTS
Black Lives Matter and income inequality are no more dynamic movements than journalistic freedom/free speech and income redistribution are in Africa.

This year was notable for popular movements gaining political momentum throughout Africa. This leads to a truly fascinating social dialogue, about justice and equality and the limits of the state.

In South Africa the country experienced the first major implementation of its constitution’s allowance for an appointed high court to overturn a jury’s acquittal. In Kenya popular outrage over press reforms stopped serious restrictions on the freedom of speech.

As in America these movements’ fuel came not from elections but popular uprising.

#4 ELEPHANTS
I felt vindicated this year as public opinion moved way from the commercially (that is, not-for-profit commercialism) crafted notion that elephants were going extinct, and embraced the more nuanced reality of their manageable decline.

Though the false anthropomorphization of an animal still dominated the entertainment industry, critics grew. It’s important especially in Africa that the world realize elephant are no more important than people.

There were some real banger issues, too, as when Tanzania’s ruling party arrested an ivory black-marketeer who had been known for decades, simply to achieve an advantage in its election.

Yet in both cases the results seem to have been transformative. Nigeria has begun to recapture itself from Boko Haram and in Tanzania actual events suggest that the country’s greatest cancer, corruption, may be under attack.

Does this mean that democracy is more important than its outcome?

#6 ZUMA The CLOWN
While at the bottom of the continent, democracy bottoms out completely: The current president of South Africa is so enmeshed in scandal, so childishly reactive to important national and international affairs, that many are no longer just making fun of him but insisting that he go.

I’ve often written that in a newly democratic nation the chief executive is often something quite unusual. But Jacob Zuma has overstepped the boundaries of a cartoon and may be putting his country in real peril. One indication of this is the plummet of the rand.

#7 TRUMP
My detractors will claim this ridiculous, but it isn’t. Africans have always been intrigued with American politics, even at its tamest, so there’s hardly anything unusual with interest in the opposition’s front runner.

But we need to heed what Africans are saying: There is an acute understanding that Donald Trump is not just a trouble-maker but a very evil force in America.

#8 EVOLUTION
Because we evolved in Africa, Africa will always figure prominently in the discussion of evolution. As technology improves discoveries increase and are more frequent.

Homo naledi may be the greatest discovery of early man in the last fifty years. The American turned South Afrikaner who found it is a wonderfully refreshing personality to percolate up the ranks of paleontological celebrities! His discovery has been presented so transparently, I hope not just the science but his methodology can transform the jealous and conceited way American paleontologists have dominated the science for years.

#9 MAN vs. BEAST
This goes well beyond the specifics of elephant poaching to the new if “modern” battle between the emerging African middle class and the wild animals that live all around them.

Lion poisoning, especially in Kenya’s Maasai Mara, profoundly demonstrates that the only solution – or at least the only path to a solution — is through government not private initiative.

#10 AFRICA TOO EXPENSIVE
Interestingly linked to #9 above the cost of an African vacation for a foreigner has been increasing faster than any vacation in the world, and Africans are about to price themselves out of future markets.