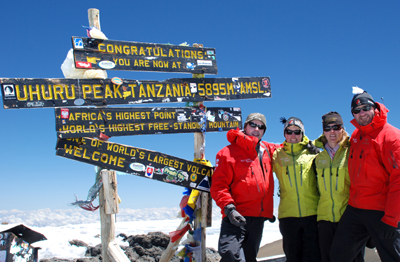 Q. I have a friend who told me that he was thinking about trying to climb Mt. Kilimanjaro. (I had mentioned that you are the travel sensei of central eastern Africa.) I’m not sure how serious he was, but I told him I’d find out some information. How much would it cost for EVERYTHING to go to Tanzania and climb Mt. K? (Please include return flight cost this time.) Also, how long would the whole trip take? What kind of dangers are there?

The vast majority of these are budget climbers and they travel the “Marangu Route” which is nick-named the “Coca-cola” route. The Tanzanian government has built three dormitory-styled lodges on the route, with rooms that have 4 to 8 bunks with shared toilets. The Marangu Route is only one of 7 routes up the mountain, but it is the quickest (some argue, therefore, the most difficult) and the least expensive. Three days up. Two days down. Climbers can actually arrive without any prior reservations at the park gate with their backpack and gear, hire a porter/cook (which is mandatory, but you must supply the food), pay fees and begin climbing. This completely self-catered climb will cost around $700, most of it government fees.

Most of the people who try it that way don’t make it. Fitness is not the principle concern, since Kili is basically a walk to the top. Most failures to reach the summit are caused by inappropriate responses to high altitude, and it effects most people around 12,000′. (Kili’s summit is 19,349′) By adding only a couple hundred dollars to the basic cost, you can make professional arrangements with basic outfitters like the Marangu Hotel. These better trained and chosen porters and guides, with proper food, could double your success potential. Nevertheless, the Marangu Route is a tough one because it’s so fast, and it’s the least scenic way up the mountain.

EWT and a number of other companies outfit the more scenic climbs, and these can be as long as ten days with huge staffs carrying tents, showers, toilets, food, etc. Perhaps the most scenic route is the Machame Route. The most challenging is the Umbwe Route. There is a vast variety of costs for these 5 to 10-day climbs, ranging anywhere from $2000 to $6000 per person, depending upon the time of year, level of outfitting and required skill of the guides.

As to the safety, about a dozen people a year die trying to climb the mountain, but these are usually nonclimbing fatalities such as heart attacks and undiagnosed pulmonary edema, which in most cases could have been avoided had the climber been better outfitted or had better guiding. However, in November, 2008, a serious avalanche killed 5 people, and represented the increasing effect of global warming on the mountain. Another reason to choose a good outfitter who will know what parts of the mountain are safe, and which aren’t.

Properly outfitted, the danger is minimal and almost exclusively a matter of how your body reacts to high altitudes. EWT has outfitted U.S. Olympic medalists in track and field who didn’t make it to the top! And we outfitted a 70-year old man with one lung who did!

No matter what level of outfitting you choose, it’s always recommended that you give yourself some time in Tanzania before actually starting the climb, to shake jetlag and adjust to higher altitudes. You can do this by just hanging out in Moshi town under the mountain (at 8000′) or by some rigorous hiking in spectacular national parks.

As for air fare, it changes so much it would be worthless to quote until you really know the dates you’re going to go. In the course of 2009, roundtrip air fares from New York varied from $1350 to $2480 roundtrip.