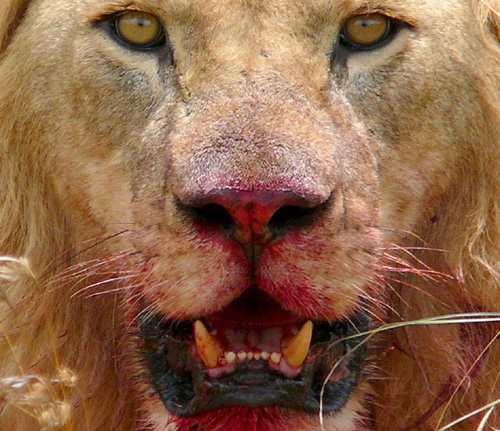 The killing of Cecil the lion has now been followed by the killing of Swales the guide. Both tragedies are pathetic examples of horrifically poor safari management typical of Zimbabwe. Neither would have happened in Kenya, Tanzania or South Africa.

I haven’t written about Cecil until now, although canned hunting, which was the cause of Cecil’s murder, is a subject I’ve often blogged about.

The 2013 canned hunting scandal with cable start sportsperson Melissa Bachman rattled her employer, National Geographic, so much that they fired her.

Bachman had proudly displayed a lion she had shot on a canned hunt … just like the dentist did with Cecil.

But Bachman was a celebrity. The dentist wasn’t until now, and there are literally hundreds of Americans each year who book canned hunts in southern Africa… and, by the way, in Texas.

A lion almost as famous and certainly as monitored as Cecil, named Nxaha, was responsible last week for killing the Zimbabwean safari guide, Quinn Swales.

The American media jumped on the incident as a way of recounting the interest in Cecil, but the fact is that the two incidents are quite different.

Cecil was a sanctioned, canned hunt. The bluster currently being shown by the Zimbabwean government, going so far as to “demand” the extradition of the dentist back to Zimbabwe to face trial, is absurd.

They did nothing illegal. In fact, hundreds of Americans every year sanction this kind of thing by purchasing it. It was the dentist’s poor experience as a hunter that led to the lengthy tracking of the wounded animal.

In the more recent case it was abject incompetence if not complete stupidity.

Swales was taking a small party on a walking safari, and he is clearly not the one to do so. He recognized the tracks of lion, including cubs. Multiple reports, including from his employer and Zimbabwe parks, confirm that he recognized cub tracks.

You don’t walk towards lion cubs.

But he did, and they saw him.

“We can confirm that Quinn did everything he could to successfully protect his guests and ensure their safety, and that no guests were injured in the incident,” the owners of the camp Swales was associated with said in a statement.

But the event should never have happened in the first place.

Walking safaris are increasingly risky in Africa as human populations engulf wilderness areas and the habitat for big game decreases. I no longer allow my clients to walk in East Africa under any circumstances.

Southern Africa is different, although I wouldn’t recommend that anyone do anything in Zimbabwe, frankly. The country is a mess, conservation is in ruins and its national parks are badly managed.

But in all cases, you do not walk towards lion cubs.

None of the reports indicated how old the cubs were, and that could make a difference. If they were 9 or 10 months or older, then the protective instincts of the parents would have waned. I’m presuming this was not the case. For one thing a 9-month old male cub is about the same size as his mother.

I’m glad none of the tourists were hurt. But their very presence in Zimbabwe is an indication of further incompetence.

Incompetence in the wild is unforgivable. Second chances are very rare.