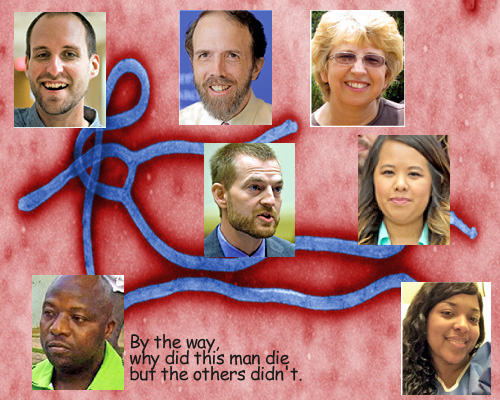 The ebola epidemic is the Number 1 story in Africa for 2014, and for a slew of reasons.

The epidemic started in March and will likely continue well into this year, but the spread is slowing and increased public understandings have reduced global fears and improved people’s sensitivities to poverty and war.

Today just under 7,900 people have died of ebola from a known 20,000+ cases in seven countries: Liberia, Guinea, Sierra Leone, Nigeria, the US, Mali and the UK.

The UK’s case occurred just this weekend as a health worker in Glasgow became sick after returning home as a volunteer in West Africa.

Of the nine people who became sick with ebola in the United States, one died; more than 3,400 have died in Liberia and 2,700 in neighboring Sierra Leone; 1,700 in Guinea and eight in neighboring Nigeria.

That makes the U.S. the only country where this specific outbreak has caused a death outside of West Africa. Not Kenya, not Tanzania, not South Africa. Just the U.S.

The public’s control of its initial panic comes from a growing understanding that the disease while extremely serious is not uniquely so.

Had polio, HIV, SARS, MERS or even the current flu epidemic in the U.S. broken out in this part of Africa at this same time, it is likely an epidemic would have occurred just as it did with ebola.

The control of the disease is relatively simple where hardly more than a basic public health infrastructure exists, as was demonstrated in Nigeria. Similarly so in the U.S., where another lesson was learned:

Health care in the U.S. – at least at one hospital in Texas – is not what it’s ranked up to be.

A month ago I wrote ebola’s “Epilogue.”

Fox News, not exactly your Bible of Reality, reported in late September that there could be more than a million cases as of … today. But note that the Fox report was based, if in a skewed way, on a CDC report.

As school opened this fall, Americans in remote farm country in Nebraska were keeping their kids home.

American movies were taking over American’s minds. American greed for the macabre made it worse. Worldwide racism exacerbated notions that what was happening in West Africa was not the human normal.

In fact, what we learned was that an infectious disease is one of the best long-term indicators of the devastation of war.

It is, in fact, that near total devastation of Liberia and Sierra Leone that among so many other horrible outcomes left a densely populated area without any public health care.

Our inability to understand that parts of the world – even in Africa – might actually be better off than us came when South Africa reported it had recently and in past outbreaks adequately treated and totally contained ebola when … in Dallas, they let it walk the street.

Nothing requires public health care as much as an outbreak of an infectious disease. We learned that inside out, I’m afraid, when we first reacted to this outbreak by believing increased monitoring at airports would be valuable.

As predicted and now as proved, it was meaningless.

We learned the power of public health policy when Chris Christie quarantined an incoming health worker, and the fallacies of knee-jerk reactions that were equally meaningless.

America as the single largest economy contributes disproportionately to the health of tourism in Africa, and African companies were spinning like tops trying to figure out what to do when the ebola panic began to effect them.

Never mind that the centers of big game safari travel, in East and southern Africa, were often more distant and cut off from the ebola centers than New York. “Africa is Africa” was the juvenile mantra.

The companies responded with equally juvenile policies that tried to protect their unthreatened backsides, although that lasted only briefly. After I and many others shook Africans back into their senses, it was a simple matter of doing what any good hotelier in San Jose, California, would do if ebola broke out there.

Because, of course, it won’t.

Some tell me I’m too calloused in my blogs about ebola. They’re dead wrong.

Just because I’m as distressed with the level of child poverty or gun homicides in the U.S. or as miffed by Americans’ fear about health care while traveling in the country that performed the first heart transplant doesn’t mean that I underestimate the severity, misery and desperation that ebola causes.

It’s just that I see that same severity, misery and desperation in many places. Like Dallas.