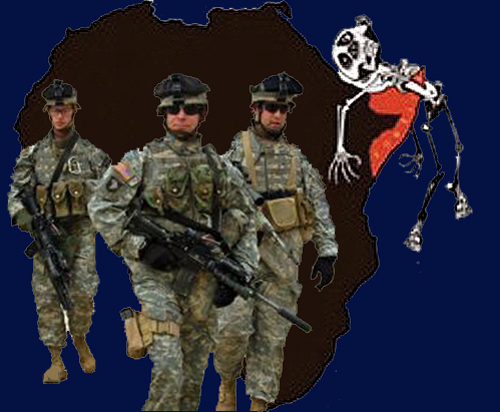 2012 goes down in history as the first time a modern African military defeated then occupied a terrorist state. Somalia fell to Kenyan soldiers. Except that there’s a lot more to it than that.

My #1 top story for 2012 in Africa is the “pacification” of Somalia by the Kenyan armed forces, and #2 is the less obvious reason why. To see a list of all The Top Ten, click here.

The #2 story, the “less obvious reason why” the Kenyans conquered Somalia is the enormous covert military operations by the west, particularly the U.S. and France.

That assistance actually does include boots on the ground, but the Green Berets and French Foreign Legion are stealthy. They’re only rarely seen.

And while their presence has been most notable in the Somali war, they’ve been seen elsewhere, especially in central Africa in The Congo. About a 100 U.S. forces arrived publicly in Uganda for that effort. The French have a lot more in northern Africa.

These two top significant events on the continent last year have enormous implications globally but of course even greater ramifications locally. But I’d suggest that in a worldwide context they are among the top events of the year.

Somalia has been an anarchic geopolitical unit for 20 years. The implosion began when Bill Cinton abandoned a United Nations effort to hold the country together in 1993, what is commonly known in America as “Blackhawk Down.”

The country quickly broke apart into ethnic and clan-based tiny warlord states originally fueled by the weaponry left by Blackhawk Down. That later was sustained by piracy and other black-marketteering. Although two northern parts, Puntland and Somaliland, managed to organize themselves into something more stable and less onerous than the old Taliban Afghanistan, the majority of the country remained ruled by local warlords.

The Russians left Afghanistan in 1989 and shortly thereafter the country was ruled by the Taliban which welcomed the gang of Thugs led by bin Laden. This was a turning point in global power, a specific outcome of the end of the Cold War.

Perhaps the world was so tired of conflict that the west in particular grew inward desperate for periods of no war. Be that as it may, no president in the history of the U.S. has so dropped the ball on world peace like Clinton did, then.

His early nineties retreat from Africa caused all sorts of mayhem, from the Rwandan war to the Nairobi and Dar embassy bombings. He has since apologized, and some of his advisers at the time say he had been distracted from the growing turbulence in Africa by the Monica Lewinsky affair and subsequent impeachment.

I believe that radicals like bin Laden were emboldened by the subsequent mayhem. The Rwandan holocaust preceded by the implosion of Somalia was a calling card to bin Laden. A few years later, he blew up the American embassies in East Africa.

A few years later, he blew up the Twin Towers.

And so it has ever since. And America’s extraordinary response, the military involvement in Afghanistan and Iran hasn’t worked. Obama knows this. Like suburbs hiring trained snipers to kill deer eating their city park roses, Bush tried to eradicate terrorism with firepower.

All it did was blast it to the sides: Africa. Deer aren’t as dumb as you think. They sense the sniper’s limits and move out. For a while the city park’s roses bloom magnificently, but roses on the periphery don’t do so well.

For example, Somalia. Bush shotgunned Afghanistan, then Iraq, and many of bin Laden’s thugs were routed elsewhere. Not too many years later they ended up in Somalia after a short stint in Yemen. The al-Qaeda became al-Shabaab and conquered the warlord states of southern Somalia. What had been Afghanistan under the Taliban was now Somalia under al-Shabaab.

One and the same.

So Kenya especially began to suffer the same way all the countries bordering Afghanistan suffered. It starts with refugees. That is a problem of enormous magnitude, aggravated in Kenya’s case because the camps were located in its far and remote northeastern frontier.

And quite apart from the strain of such a responsibility economically and socially, the camps become conduits for terrorists to enter Kenya. Shortly Kenyan bus stops and churches were being blown up by suicide bombers.

So a little more than a year ago Kenya announced it would mount a military operation into Somalia. George Bush failed getting Pakistan to do the same in Afghanistan. Obama succeeded with Kenya. At first we all laughed out loud. But we were wrong.

At first the Number One News that Kenya has pacified Somalia seems so good. Part of it is. A multiple generational war is ending. Good, right? Yes, of course when any conflict ends.

Mop up continues, but when the Kenyan army captured the town of Afmadow we knew it would only be days before Kismayo fell to the courageous Kenyans. As it turned out it was months but it did finally fall and today Kenya occupies most of what only a year ago was troubled Somalia.

Today, Somalia has an effective government and the capital of Mogadishu – while not exactly a tourist haven yet – is peaceful. Kenya, on the other hand, is increasingly troubled.

I believe Kenya is too advanced and mature a society to succomb the same way Afghanistan/Pakistan, Yemen and Somalia did. Yes, folks, Kenya is more socially atune and politically savvy than Pakistan. I’m hopeful that the current bombings and other violence will slowly end as the new constitution is cemented with elections in March.

The unpleasant conclusion is that for the time being, they’re in Kenya, and so Kenya is not a good place right now to visit.

Obama and Hollande seem to think the terrorist can just be chased into oblivion, and oblivion to them is currently beyond Kenya somewhere else in Africa. Are you following what’s happening in Central Africa, today? Or Mali? Or Nigeria?

I’ve been very skeptical about this policy. I’m not sure the west has enough resources to chase every terrorist into oblivion. I wonder if it’s time to let up.

But I’m uncertain. As uncertain as Clinton and Mitterand in 1994 must have been before a million people were slaughtered in Rwanda.