Every Thursday in February the Smithsonian Museum of African art opened their galleries for the North African Film Festival, highlighting films from Egypt, Tunisia, Morocco and Algeria.

I would accuse the Smithsonian of war profiteering, but I suppose they had this planned long before Tunisian president boarded his plane for Saudi Arabia.

My favorites this month were Bab’Aziz;The Prince Who Contemplated his Soul, and Outside the Law.

These are as different as two films can be; the first is a beautiful fairly tale that unfolds ever so slowly across the rolling sand dunes of southern Tunisia, while the other is an urban, visceral, action packed guerilla war epic with an elevated body count.

However, I think both put you in touch with the modern fabric of N. African life; one with the whimsical fantasy and mysticism of Sufi Islam, and the other with the legacy of pain and resistance that I have been told figures quite prominently in North Africa’s public consciousness. 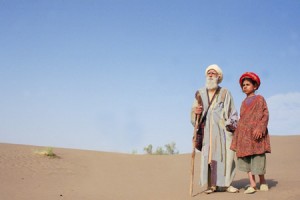 This movie is filled with music—not just the energetic, haunting Dervish music that various wandering souls sing or play throughout the film, but also the music of the wind over the dunes, or the cackle of a fire.

Many reviewers called Bab’Aziz a “visual poem”. The entire movie centers on the Journey of Bab-Aziz, a blind dervish, and his spirited granddaughter Ishtar, as they trek through the desert in search of a gathering of dervishes that takes place once every 30 years.

As Bab-Aziz reminds Ishtar and the viewers throughout the movie, no one knows where the gathering is to be held, but everyone who has been invited will eventually find their way there.

This set up mirrors the quote from the Hadith, or sayings of the prophet, that opens the film—“There are as many paths to God as there are souls on the Earth”.

A quick refresher on Dervishes.

Dervishes are Sufi Muslims following an ascetic path, or Tariqa (Interestingly enough, in the West African Fulani language spoken where I spent my Peace Corps days in the Fouta Jallon, Tarika means tale or narrative.)

Their origins are most likely Iranian and/or from the Indian subcontinent, but today Dervishes are most closely associated with Turkey and to a lesser extent North Africa.

Much like Christian monks, Dervishes can belong to any number of orders whose garb and rituals may vary.

In general, Dervishes take a vow of poverty and seek spiritual purity and enlightenment through humility and dedication to religious principles.

Back to my thoughts on Bab’Aziz.

Time seems suspended as Bab’Aziz and Ishtar wander through the dessert.

The desert becomes a transformative space where normal rules are suspended, and the Dervish aesthetic predominates.

People from the real world that wander into this transformative space throughout the movie are crushed and humbled by the immensity of the desert, and eventually driven onto the invisible path beneath the desert sands that winds, seemingly aimlessly, toward the gathering of dervishes and the unseen conclusion of whatever it was that drove that soul into the desert in the first place.

Young Maryam Hamid puts in a fabulous performance as Ishtar, the grand-daughter, and the supporting cast plays their bit roles well enough to let the “visual poem” unwind without distractions.

Some of my companions found this film beautiful, but slow.

I am sympathetic to that critique in so far as the there is almost no ‘action’ in the film, but it takes time to suffuse the audience with the music and silence of the desert. I think director Nacer Khemir hopes that viewers leave this film feeling crushed and humbled, but with the feeling that somehow they too are on a path. 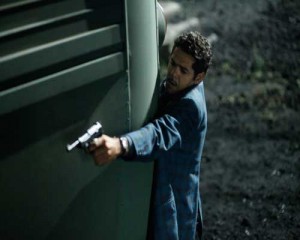 Do not take a first date to this movie. Outside the Law is 220 minutes of non-stop high drama, with nary a smile for comic relief.

That being said, it is one of the best guerrilla war epics I have ever seen.

The film is also very controversial in France.

Its release drew thousands in protests in Southern France where the war in Algeria still raises temperatures on both sides.

The film opens with a split screen. On one side, jubilant scenes of V-E day in Paris, French women are kissing members of the resistance in the street, and De Gaulle is congratulating the French population on throwing off the tyranny of the Nazi oppressors, while on the other side of the screen, the French military and pied noirs (European Colonists living in Algeria) are massacring peaceful protesters on May 8th, 1945 in the Algerian town of Setif.

This same message is repeated in a myriad of different ways throughout the film.

How can the French, who have just thrown off the chains of oppression themselves, not recognize the righteousness of the Algerian cause?

How can they not see that they have become the oppressors?

In one seat gripping scene, the three brothers at the center of the film kidnap a French colonel who had distinguished himself in the resistance during the Nazi occupation.

The colonel’s decision will ripple through the lives and deaths of the film’s cast for the remainder of the film.

I am neither French nor Algerian, and do not feel entitled to the gut wrenching emotion that this conflict evokes in those whose lives were touched by it…but this film made me feel it anyway.