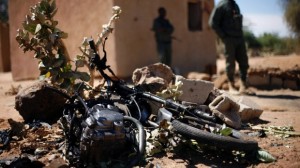 Two days ago the first Malian in history blew himself up in an attempt to kill others.

Americans have become so inured to suicide bombings that this fact may seem tragic but inconsequential.

Most Malians, however, have yet to recover.

This simply does, or did, not happen in the land of Sundiata Keita.

Nowhere in Songhai chants, or Fulani poems, or even marshal Bambara stories do people talk about strapping bombs to their waist and taking innocent lives.

In centuries of warfare between Arab and Bantu, nomad and farmer, Muslim and pagan, such a thing as never happened.

Let us try for one moment to return to our pre-9/11 innocence and feel some shock, and some sympathy for a corner of the world previously uncontaminated by this particular evil.

I remember when the first Boko Haram suicide bomber blew himself up in Nigeria.

My Nigerian friends and colleagues were stunned. It seemed as though they took the attack as an indictment of the culture they thought they knew and understood.

Even mass killings of Muslims and Christians on the Nigerian central plateau did not generate one-tenth the moral outrage of that single suicide bombing.

Inter-communal conflict was something they understood intuitively. This business with bombs was not.

Americans have become unconscious experts at shielding ourselves from the emotive power of a suicide bombing. We have had too.

In silent partnership, the news consumer and the news provider reduce an attack to its purported essentials – the death toll, the mechanics of delivering the bomb, and which group of crazies was claiming responsibility.

In Mali’s virgin case—two deaths, by bicycle, and the Movement for Oneness and Jihad in West Africa (MUJAO).

Why do we wallow in the raw emotionality of a natural disaster, or school shooting, or even an individual suicide, but culturally divorce ourselves from the most heinous and powerful act of violence and protest available to today’s discontents?

I think it remains much easier to homogenize people we don’t understand in far away places by reducing their actions to banalities like numbers of wounded and how the attack took place.

Stop and think about what we’re saying; someone was just willing to die in order to kill!

If we let ourselves feel the tragedy of a homegrown suicide bombing in Mali, we would probably have to ask why the attacker felt strongly enough to blow himself to pieces.

Through this we would learn, to our concernment, that he was not ‘crazy’ in the sense of being insane, and all this introspection might lead us to think more clearly about the blowback from our global war on terror.

These thoughts will of course feel vaguely (and wrongly) treasonous.

It is far easier just to think of Mali or Africa as somewhere used to getting a raw deal.

Maybe somewhere where life comes a little cheaper, and craziness prevails. This is nonsense, but hard to shake if you were raised on the same images and news coverage I was.

Fight the urge to disassociate and dismiss.

The new normal is NOT normal in Mali, and an entire society will need to rebuild its sense of self (or senses of selves) in a world where the tears in the cultural fabric are large enough to permit boys with bombs bent on self-annihilation.